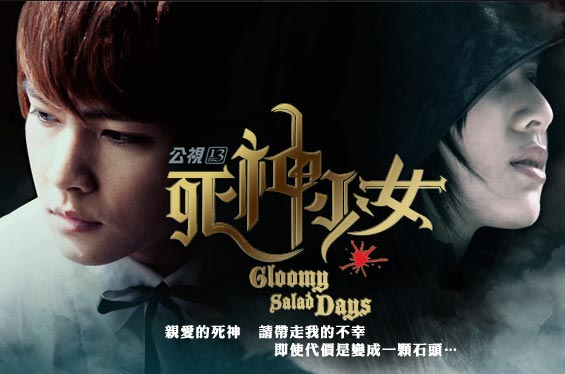 GSD has a little bit of supernatural and whole lot of teen angst. Every episode focuses on how the students of Shiyu High School deal with social taboos. And how Du, the keeper of Neihe Bridge (Bridge of Helplessness a.k.a. Hell Gate), watches them overcome the challenges or fall victim to them. Those who can't cross the hurdle will die and be turned into a stone to repair the bridge so others can cross it.


****** Summary *******
My fascination with GSD started with the story "Xiao Lin." The second black stone holder, Xiao Lin, is a girl who loves her family and desperately wants them to love her too. Unfortunately, her parents were in a bitter divorce and had no time for her. So, they sent her to her relatives for keeping. Her relatives, in turn, sent her to a boarding school so she would be out of their hair. The poor girl couldn't scrape an ounce of attention from any of her family members. Her final plea for their love and attention came on a winter vacation.

The entire school went home to celebrate the new year, but she was left on the school doorstep waiting for her father, whom she had not seen for almost a year, to bring her home. The girl was devastated when he didn't show up on the first day or the second day. She then asked her mom to come, but her mom was in a drunken rage and didn't hear a thing Xiao Lin said over the phone. I can't imagine how hurt and angry she must've been to feel unwanted by her parents. But it must've been pretty bad because she burned all her food and vowed that she would not eat anything unless she was eating with her parents.

So there she was hungry and alone in an empty school when Du appeared before her. Du, in her cold yet seductive voice, asked, "Why are you doing this to yourself? Why don't you just ask for help?" Xiao Lin stubbornly replied, "My parents WILL come and I will have my big meal with them." Du was probably thinking what I was thinking, Poor girl, your selfish parents don't deserve you. I was also thinking of an advice another character had given to Xiao Lin: The key to prevent being cast aside is to cast them aside first.

Her parents never did come and Xiao Lin was starved to death in her dorm room. With her last breath she whispered to Du, "I want my mom and dad." Du relied, "They will be with you shortly." Next scene was her dad in a car accident and her mom passed out on a front porch.

If "Xiao Lin" caught my attention with her desperate quest to have a place in her home, then it's "Li You" who had me glued to the drama with his quest for a place in the world.

The moment Li You stepped into Shiyu High, he became the object of every girl's loving gaze. He was rich, good looking, graceful and mysterious. Yet he seemed to be oblivious to all the attention. He was only interested in playing basketball. And through the game, he became close friends with basketball team captain Ah Guo and his sister Xiao Ju. Life was going well for him until a crazy, vindictive, jealous classmate exposed his closely kept secret: "He" was actually a "she."

Li You had always felt that he was born with the wrong gender. He was in every way a male except for his body. Transferring to Shiyu High and enrolling as a male student was his chance to live a "normal" life.

The shocking revelation didn't go over well with his schoolmates, and most of all, his buddy Ah Guo. Ah Guo was not only disgusted, he was furious and out for Li You's blood. (Note to self: Watch "Boys Don't Cry") He hated Li You, a fake man, for getting into his boy's club. He also hated Li You, a fake man, for trying to steal his sister Xiao Ju. By all accounts, their friendship was over.

Li You was crashed. No matter where he turned, he only saw rejection for who he was. In his despair, he asked Du to take him away if he couldn't get Ah Guo to accept him. If even his best friend don't approve of who he really is, then there is no place in the world for him. In that case, turn him into a stone to repair her Neihe Bridge.

Ah Guo was not kidding about beating Li You to a pulp. He swung a bat across Li You's rib cage knocking the air out of him. As Ah Guo stood there with the bat watching Li You curled up on the floor in pain, he slowly came to accept that Li You was not a perverted girl or a hateful fake man. Li You was "just" Li You. The same Li You that he knew and wanted to be friends with.

Du watched those two friends survived the biggest trial of their friendship, then she faded from the scene.

Where can I find eng subs?
Top