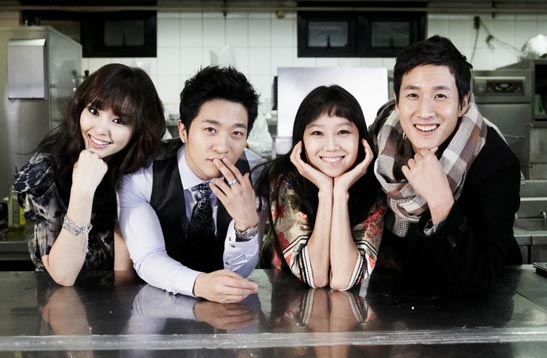 Synopsis
“Pasta” covers the dreams and success of a young woman who aspires to become an elite chef at Mamma Mia restaurant.

Seo Yoo Kyung started her career as a third ranked chef assistant at Mamma Mia restaurant. She eventually works her way up to become a chef.

Choi Hyun Wook is the top chef at Mamma Mia restaurant. He studied the culinary arts in Italy and started out as a chef assistant at a hotel in Sicily. Hyun Wook eventually worked his way up to become the most widely recognized Italian chef in Korea.

***Credits to Korean Drama.org for the Information***
by mimi_siko
that's Alex !!
*yaaay* I think this drama is must watch for me..

by silverstarach
Hi mimi_siko.. I just get to watch the 1st episode and I like the story so far.. Can't wait for the next subtitles to be released.. Im so glad that WITH S2 is subbing this drama =)

The Trailer for the drama is in youtube if you like to see.
http://www.youtube.com/watch?v=IlpH_EGt ... re=related
by lilostitch
I watched the first 2 episodes and it seems like a fun and light-hearted drama. I always like dramas that involve food.

In the second episode, while in the kitchen, the new staff answered to the head chef in italian. What exactly were they saying ? I believe they are saying "yes chef". But can anyone please tell me what it is in italian ?
by epixeltwin
Although a light-hearted drama is fun, what I like is being able to get attached to the characters!

So only 2 advices here huh? What do other people think?

Reading the synopsis didn't make me want to watch it, but Lee Sun Gyun is my favorite Korean actor because I've never seen a better male drama character than his Choi Han Sung in Coffee Prince.

So do I have another good reason to watch this besides Lee Sun Gyun?

Thanks !!
by Ethlenn
This is good, and is getting better^^
Lee Sun Gyun has one of the best facial expressions. And very, very nice voice.
by Endroine

epixeltwin wrote: Reading the synopsis didn't make me want to watch it, but Lee Sun Gyun is my favorite Korean actor because I've never seen a better male drama character than his Choi Han Sung in Coffee Prince.

So do I have another good reason to watch this besides Lee Sun Gyun?

Choi Han Sung is really my fav drama character ever X_X
The synopsis didnt make me want to watch it either, but i did o.o and its fun o.o it gets cuter in later eps the only annoying thing is the fire-hire-fire-hire lol
And: NO MIN WO IS IN THIS!!! HAWTNESS!!! <3>.> ?
anyway lee sun gyun is an **** in this

but i still luv him o.o and alex! O.O (i didnt know it was alex/i dont know him but i surely do know him now! HE IS SO CUTE !

) -fangirls-
@lilostitch i think it means yes, okay or something atleast thats what i think with my 0,1% knowledge of Italian lol.
by archive18
Just finished watching this. Great series well worth watching.

by Peggy
I love this drama. I am watching it two nights a week on TV and it seems like a lifetime between each Monday night. I m resisting watching it online. I like all the actors especially Lee Sun Gyun. He is such a good actor and he has a way of walking into a scene as if he really is the top chef who owns his every footstep in his kitchen.

I am also delighted to find ALEX. Gosh he is marvellous. I never knew who he was singing with Clazzique , but now I am waiting for his solo album and one of the group albums. I love his voice and how he sings so easily. He plays guitar it seems, tho I don't think with the group. He is a good cook himself so this role as restaurant owner is just up his alley.

I don't know how this will all turn out and I am going to avoid any spoilers in this drama. Usually spoilers don't worry me at all but this drama is too good to know the end.

Peggy
by Neliets
Seems that this is interesting drama but who`s subbing this?
by wmcnair370

Neliets wrote:Seems that this is interesting drama but who`s subbing this?

Loved this dorama. Wished it was still playing cause I loved Yoo Kyung and Hyun Wook. Definitely one of my favorite couples.
by ilovetrenchooo
This actually has 20 episodes right? I'm currently watching it. But my copy's subtitle sucked since episode 16 started. Can anyone recommend a site where I can watch this with Eng sub? My net sucks as well so watching it at aznv.tv doesn't make me it enjoy it. Thanks!

Oh, and I love Lee Sun Gyun's arrogance in this series. Arrogant guys who are still able to take care of a girl are looove! <3

Also, I like the fact that the other girl doesn't make things so complicated. Oh, and Alex. Still as charming as he was in We Got Married.

This series is very simple yet very beautiful.

by isuzu
Just finished watching this. I LOVEEEEEEE Lee Sun Gyun. Even though he was really douchy a lot of the times, I couldn't help but fall in love with him. His voice, his facial expressions, his temper! Oh man, I'm thinking I just changed my ideal type of guy. Those with tempers!
by haruhi-san

Im so sad that it was only 20 episodes. I really want to see them
in a relationship now that its all out there

LOL, I never forget "Shheeepu" "cheefff"
by Peggy
I loved this drama so much. I liked the cast and fell for Alex of course. Why doesn't he do another drama. Sooooooon!!!

I can understand why anyone would not like this if they are not into cooking and seeing how a restaurant kitchen staff works. It is hectic to say the least and the Head Chef is so stern and loud and generally makes everyone scared. But it is fun and the love story that runs along is really rather sweet and funny. I like that the girl is not a pushover but keeps on getting back and fighting for every inch.

I am going to watch this again when I need something to lighten the day.

Peggy
by Ethlenn
Yup, this is exactly that kind of drama that can lighten the mood. Like Coffee Prince, accidentaly also around food^^

Mmm, coffeeeee...
by Orion1986
Alex didn't do it for me, actually. He was like a Waffle Sun Ki clone, but not quite.

Forget it, pal. Kim Jae Wook is unbeatable in that style.

The tall guy out of the Italy trio was nice. And also the guy from the original crew which is also in Coffee House as an employee in Eun Young's company.
Also, the young head waiter, or what was he, wasn't bad either. Of course, all these guys were just ok to look at. Didn't really love anyone in Pasta.

I did love the series cause the couple was just so cute. Ahahaha. And I wanted to kill Lee Sun Gyun's character most of the time, so that means he did a great job. Ahaha.
I tell you, I wouldn't want that guy mad and yelling at me. And he's even creepier when he doesn't yell cause you just know he's about to go haywire on you.

Since the series was so much more for adults though, I would have liked some better kissing. I mean, the whole "kiss just as the bus arrives" trick is too cheap of a way to hide it.
And it was stupid to hide it anyway. Unless a fan of an individual actor/actress, I don't think many teens would find this terribly exciting.
So why not have normal kissing? That's the only part that really disappointed me and I expected more from a more mature series like this.

Overall though, very nice. The main couple was worth the trouble, even though not much else did. Didn't give a damn about the stories of the others, but the couple was just too cute.

by ahireasu
I am currently watching it love it and I would like to know if there is any other drama with the same theme ?
by Peggy
ahireasu,

re your question of another similar drama. I suggest you look up Kim Rae Won because he did at least one food drama. I did not see it yet but it looks interestig. Last year I think or maybe 2009. If you type in a search for 'Korean dramas about food and restaurants' I am sure many will turn up.
by Ethlenn
It's called Gourmet and it's really good. Well, Kim Raewon is in it so...
by ahireasu
Thank you both for your swift replies , I will check it and probably download it like today :p .
by Peggy
Ah Ethlenn, You and I often ride the same route I see.... Well as you say..it's Kim
Rae Won and I hope he is coming back this year.
by kiddygrade
Just a question: what does the Chef says in korean to mean "No woman in my kitchen"? I didn't grasp it at all :s
But it's a great drama and I love it (as much as I love pasta in real life^^)
by riki_kun
I might watch this just to see how accurate it is about Italian Cuisine , recipes and ingredients , or they just make things up , lol.
All times are UTC
Page 1 of 1
Powered by phpBB® Forum Software © phpBB Limited
https://www.phpbb.com/