Kanno Miho starred in various drama such as watashitachi no kyokasho as a lawyer, casts in dance drill and more dramas... She might be not very known, but she is a beautiful actress with great skills...
Last edited by mikomiko123 on Jun 17th, '08, 03:07, edited 2 times in total.
Top

Anyone who's in the "know" about Japanese entertainment should know who this woman is. If you don't even know Miho as an actress, you definitely know her for the photobook she published a few years ago. Probably one of the last famous-to-topless people I can think of (others include Miyazawa Rie and Fujita Tomoko.)

I like Kanno's acting but i just have a question about her nose. does anyone know if she had a nosejob done? imo, it looks perfectly sleek!!

yeah... i luv her too, shes great... i wasnt quite sure if many people know her, cuz her name wasnt in the list, so i thought of creating this, and im planning to create inamori izumi's too, cuz shes not in the list either, i think... and about the nose one... i dont really know... well a lot of celebrities do ther noses and stuff...lol
Top

harukaya wrote:I like Kanno's acting but i just have a question about her nose. does anyone know if she had a nosejob done? imo, it looks perfectly sleek!!

In Iguana no musume, her nose looks the same so I guess it's her real nose.

i think she is really pretty and did a great acting in "ai no uta"...
though,i'm still watching it right now,it really makes me cry///

just another question...
is she the one acted as "mano" in saitou-san (jdrama)?
Top

minamichan03 wrote:i think she is really pretty and did a great acting in "ai no uta"...
though,i'm still watching it right now,it really makes me cry///

just another question...
is she the one acted as "mano" in saitou-san (jdrama)?

I dont think so. It should be in her dramawiki profile if she was in Saitou-san.
Top

i find it weird that sometimes she looks so good in one scene, and completely ordinary in another.
with regards to acting skills, she's pretty good.

a question though, has she had some work done on her lips?
Top

just a rant, she wears really odd clothes when she is offduty in this drama, i wonder if it's part of the script or her own taste.

as far as her acting is concerned, no complaints

anyone want to suggest/name her top 3 dramas?
Top

I guess I missed the poll.

I've seen her in Sommelier, Isshou Wasurenai Monogatari, Ai wo Kudasai and Tomorrow. I think she's really good in all of them. And she's got range; she can cry her eyes out in one scene then be a total mischief in another.

i agree with that MochaValencia, she's got great acting range.
Top

Let me add my concurrence with the last few posters.

Miho Kanno can play an evil villainess , a love-sick maid
or a daughter of an iguana will equal skill. I never pass
up a chance to see her perform.
Top

I'm a fan of her's too. I saw her first in Churasan and thought she was really beautiful and talented. Since then I've seen her in Doll's, Tomie, Itoshi Kimi e, Hataraki man, and Tomorrow. She's been in so many drama's over the yrs I'd love to watch them all. And refering to groink's post above I found some of her nudes after a google search. I just had to say wow


Ai no Uta is pretty good and I really liked her in it. Unfortunately, the plot
does involve an incredibly tired cliche but the ending is a bit different
from what you might expect.

Her character in Churasan was one of my favorites. The quality of the drama
sort of diminished as the story went along but Miho's character was always
a bright spot.

One of her very best performances was in Ooku which, as far as I know,
has never been subbed in English.

"Watashitachi no kyokasho" is also quite good but with a few too many plot twists
to be totally believable. Definitely worth giving a shot. Her character has several
facets.

She starred in a TV special about the first Japanese female astronaut. The story
seemed a bit fictionalized but it was still enjoyable. The title was,
"Onna no Ichidaiki - Mukai Chiaki."
Top

wow! very detailed! thank you, i'll check some of them out!
Top

Actually is has been by solo fansubs.....
http://www.crunchyroll.com/library/Ooku ... tab%3Dinfo
Top

I may be wrong but I think these subs are just for the third season of Ooku.
I should have been more precise with my previous post. My recommendation
there was for the first season of Ooku for which she won a best actress award.
Top

so Ooku has 3 seasons, and so far, only season 3 has subs?
Top

silencio wrote:so Ooku has 3 seasons, and so far, only season 3 has subs?

I think that is right although there was a couple seasons of the drama about 25 years ago.
(See http://wiki.d-addicts.com/Ooku#Season_3)

I think Miho Kanno was only in the 2003 episodes which I consider to be the first season.
Top

omg..
i watching Kiina but i didn't know she is the main actress for iguana no musume.. totally cannot recognise her.. kiina she really looked so auntie >.<

i just realised it..
Top

I love her too. Play in KIINA she is so cute.
Top

Kiina was a very mediocre drama. But due to the attraction of Kanno's sheer charisma, it was the highest rated evening drama of the season, beating out Voice by .01%
Top

Recently watched Satomi Hakkenden. Miho is brilliant in it. Her character is so dark and evil. The drama also has an allstar cast. I highly recommend it

I really like Kanno Miho's acting but her face is getting weirder and weirder...

I really like her too.
I first saw her in Koi ga Shitai, then I saw her in some other dramas and didn't recognize her, she looks different in different dramas. But I think I liked the way she looked in Watashitachi no Kyokasho the best, she was just so cute with those glasses.

Since there are two drama's with Kanno Miho being subbed at the moment: Magerarenai onna and Kimi no te ga sasayaite iru, and because they are both pretty brilliant, I've decided to look for a Kanno Miho Thread. Found this one and got interested in Satomi Hakkenden. It has no seeds anymore though. I'll try to request it at the request seeds thread.

I thought it was funny people talked about her having had a nose job in the beginning of this thread. She did look very different when she was younger, but i think its the teeth. They were a bit crooked then. She must have worn a brace at some point.
The thing that's stayed the same is the enormous talent! I think she probably is the best actress around! I've seen her in some mediocre drama's, but was always impressed by her acting. Since I first saw her in Dolls (genius!), I've been trying to see as many drama's with her in it as possible. As I was saying, some of them were quite bad. Luckily there are some real gems too. Hataraki man and now Magerarenai onna are really funny. Kimi no te ga sasayaite iru is like ten years old and although it feels a bit dated, it's really moving! actually episode 2 was among the best drama's that I've seen!

I seen Ii hito last week, also from 1997 like kimi no te ga sasa. Do you know her Photobook Nudity (not suitable for all user, contains nude art) from 1997?

Thank you for the tips. Started the download at Nya! Fansubs!

Have seen a couple of the nude photo's through Google a while ago. Wasn't too impressed with them. I think Kanno Miho is interesting for making that choice though. Think it was a gamble with her career, which is extreme. Still it bought her some freedom I think. She overcame the conservative views on women and it led to some interesting roles. She didn't have to be the sweet cute girl anymore. She's full of character, so I think she needed this. It shows in her roles in the last couple of drama's: Hataraki man, Kiina, Magerarenai onna.

I think most japanese actors (and probably most actors everywhere) are being typecast. She now is being typecast as an independant woman. That might just be the thing she wanted!

Haven't seen Li Hito. Hows that one? Might check it out later

In ii hito (check Band of Nuts Funsub) Kusanagi Tsuyoshi and Kanno Miho are playing some kind of naive and honest character. She acting like her shy nice role in iguana no musume.

I think, she looks different in this old drama. Her face was softer.
Top

Ha!
Kanno Miho san was about the only thing I liked in Iguana no musume! Thanks, I'll try it out!

Watching Ii Hito now. So there was a golden age of J Dorama

Kanno Miho is one of the best in the business, given her diverse range of acting and also her professionalism, not minding to take a back seat when needed.
Top

"Permanent Nobara" is adapted from a manga by Rieko Saibara. Kanno plays a newly divorced woman who returns with her daughter to her hometown, where her mother operates a beauty salon called "Permanent Nobara." The story deals with family, friendship, and romance.
synopsis from Tokyograph

Miho will also have another upcoming movie in autumn, "Gene Waltz", a medical movie.
Top

Does anyone know where I can download/watch this drama? 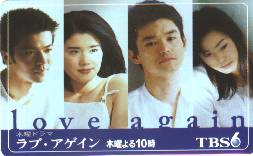 yanie wrote:Does anyone know where I can download/watch this drama?

I found a clip from this drama. One of the scene from Ep6.

Apparently this is where she cut her hair short

antspace wrote: I think Kanno Miho is interesting for making that choice though.

That wasn't so much of a choice. Actually she regretted bitterly that she made that photobook and appeared in tears at the presentation .
Top

20centuryboy wrote:That wasn't so much of a choice. Actually she regretted bitterly that she made that photobook and appeared in tears at the presentation .

Wow I didn't know that. Her agency pushed her into doing it?
Top

Mmm... That's sad. Glad it didn't end her career though!
What I meant with the remark is that I admire her strength to go a different way. I think that's somehow reflected in some of her roles.
Top

20centuryboy wrote: That wasn't so much of a choice. Actually she regretted bitterly that she made that photobook and appeared in tears at the presentation .

Does anyone have any links to an actual news report or interview about this?
I've heard this before but it's always in the form of a rumor or third-hand news other than
a real news story. (I don't consider Wikipedia a "real" source.)
Top

Just finished "Ai wo Kudasai"...
When i first watched "Kimi no Te..." i thought she was really deaf. Then realized i saw her in different doramas before, and she was not deaf in those...
My favs of her include "Iguana no Musume", "Kiina", "Ai wo Kudasai", and "Ai no Uta".
Top
Post Reply
43 posts • Page 1 of 1